Major ethnic and racial inequalities persist in the UK

Black and Muslim have inequalities in employment, housing and the justice system

Major ethnic and racial inequalities persist in the UK. Black and Muslim minorities have twice show the inequality insist the unemployment rate of their white British peers and are twice as likely to live in overcrowded housing. And related to the justice system, there are also much more likely to be stopped and searched by the police. We could also add to the list the alarming ethnic differences in deaths from COVID-19.

The government’s data about the UK’s different ethnic groups brings evidence on ethnic inequalities collected by government departments. It is a world-first, established in 2016 by former prime minister Theresa May interested in “burning injustices”.

Critics could argue that disparities of the kind from the website don’t prove that racism and discrimination are the driving forces behind the inequalities. But if we combined with other direct evidence, we can easily conclude that they play a role.

There are two main sorts of direct evidence that show racism and racial injustice continue in Britain. Surveys about British people’s beliefs and field experiments testing whether minorities receive equal treatment in practice. 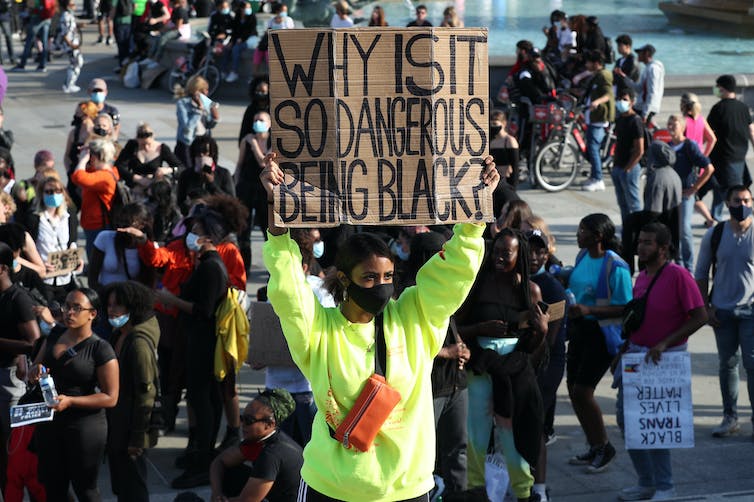 Let’s look at racist beliefs first. Through the European Social Survey a random british public answered two questions on “biological racism”. It is a way to see if there are inequalities between racial or ethnic groups.

Perhaps inequalities between these two percentages is due to political correctness. The claim that there are innate group differences in intelligence would widely be recognised as a racist statement. Whereas innate differences in work ethic may not have the same blatant connotations. But whether we go for the lower or the higher figure, on this evidence a substantial minority of the British public subscribe to some form of racist belief.

We repeated these questions on biological racism recently (2019) in a national online survey. The 19% agreed that some groups were born less intelligent. But the 38% agreed that some groups born less hard working. We also found that people who subscribed to these racist beliefs could be opposed to immigration. Also to express nativist” views. For example, that you need to have English ancestry to be truly English.

People who express agreement with these racist statements in an interview may not act on them in practice. But the finding is that minorities feel they experience daily racial inequalities in their lives.

Government data and field experiments provide a clear evidence that Black and Muslim minorities can suffer from inequality when looking for a job or home in the UK. But we can’t be sure that they are acting on racist beliefs. Unequal treatment of applicants is illegal, whatever the motivation.

Rigorous field experiments cannot conclude about the criminal justice system.  Even so, we cannot run out the possibility that racial stereotyping.

In relation to COVID-19 infections it has been a great deal more widespread than the testing indicated. We need more testing. But the testing carried out indicates a pressing need for real change.