Most Americans like their choices in today’s information-saturated world, but 20% feel overloaded. Tensions occur when institutions place high information demands on people.

Since the 1970s, the term “information overload” has captured society’s anxiety about the growth in the production of information having potentially bad consequences for people as they struggle to cope with seemingly constant streams of messages and images. The advent of the internet, it was thought, would only exacerbate this, with the onset of ubiquitous connectivity turning information overload into something even more debilitating.
[youtube https://www.youtube.com/watch?v=ia5FxoeFJWI]

A new Pew Research Center survey finds that, for the most part, the large majority of Americans do not feel that information overload is a problem for them. Some 20% say they feel overloaded by information, a decline from the 27% figure from a decade ago, while 77% say they like having so much information at their fingertips. Two-thirds (67%) say that having more information at their disposals actually helps to simplify their lives. 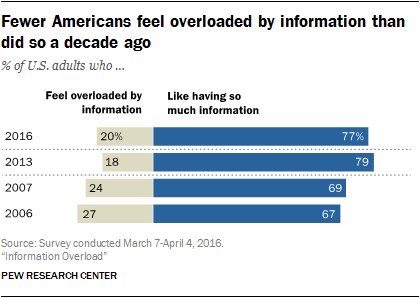 The survey information are comfortable

The survey shows that most Americans are comfortable with their abilities to cope with information flows in their day-to-day lives. Moreover, those who own more devices are also the ones who feel more on top of the data and media flows in their lives. Those who are more likely to feel information overload have less technology and are poorer, less well-educated and older.

Information Overload is important to Americans

The Pew Research Center survey in April 2016 of 1,520 Americans age 18 and older measures how they cope with information demands in their lives and how they feel about the volume of information they encounter. Generally, Americans appreciate lots of information and access to it.